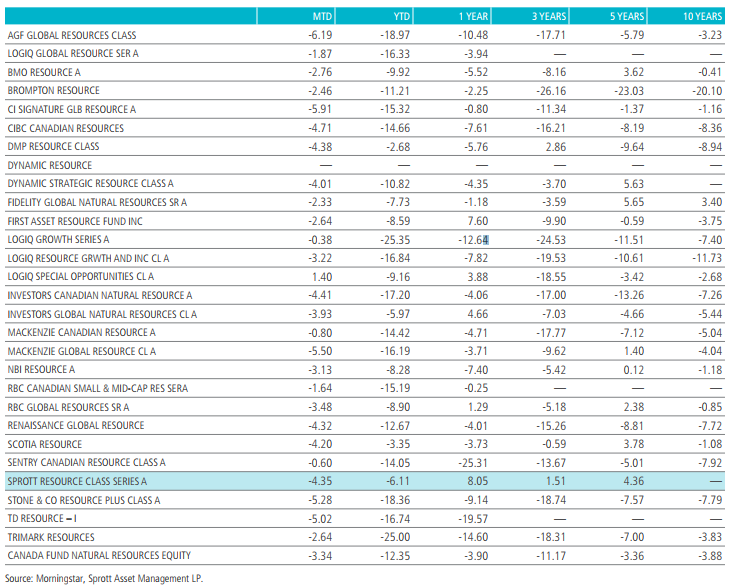 The most noteworthy portfolio development during June was Hong Kong billionaire Li Ka-Shing’s 50% owned CEF Holdings Ltd. investing $110 million into NexGen Energy Ltd. This investment was made despite the fact that uranium prices have been sliding for six years, having declined more than 70% from their 2011 highs. Although uranium has been out of favour for many years, NexGen has been a sizeable Resource Class holding because the asset is world class and is in the early stages of development. CEF’s investment validates not only the asset quality but also the need for nuclear power in China. This has not gone unnoticed as NexGen’s stock price has appreciated 23% year-to-date compared to Cameco’s 16% decline. NexGen is an ideal example of how an active approach can add value in a sector that has been in a multiyear decline.

This month we want to highlight zinc. Tight inventory levels and a lack of new primary mine supply may result in a significant price surge in H2/17. Year-to-date zinc inventories have declined 35% and have been steadily declining since peaking in early 2013. Why? Major zinc mines have been depleted. Since 2013, three mines that accounted for over 10% of primary global mine supply have been shuttered as a result of depleted reserves – these properties were mined out. The supply outlook is bleak. There is a lack of development projects with critical mass. One of these projects, Dugald River, has been chronically delayed as a result of technical challenges, but is expected to finally open in 2018. Note that starting up a mine is always challenging and considering the technical difficulties experienced to date, this will be one to watch. The only other potentially bearish supply data point is if Glencore re-starts production of their zinc mines, which were put on care and maintenance in October 2015 in response to low zinc prices. Where could prices go? The last time we saw inventories at current levels, prices climbed to $2.00/lb, which is dramatically higher than today’s $1.25/lb.