The Ninepoint Gold and Precious Minerals Fund, Series F returned -4.15% for the third quarter of the year 2022.

Precious metals equities continued to be casualties of the wholesale sell-off being experienced by virtually all asset classes through 2022. While gold bullion has experienced less downside than equities and bonds, it has declined nonetheless, losing 9.27% of its value in 2022 as measured by the GLD ETF. It must be noted that the S&P 500 (SPY) and the Nasdaq (QQQ) declined by 22.26% and 32.38% respectively year-to-date as measured. The global economy is weakening rapidly. Concurrently, rising bond yields are starting to impact government treasuries and pension funds in developed markets. We believe we are at a critical juncture as far as investor positioning is concerned. Lingering inflation and rising probabilities of a recession in developed economies of the world will drive haven demand for bullion and precious metal equities alike.

The September 22, 2022 headline in the Wall Street Journal caught our eye for a couple of reasons. Firstly, because newspapers tend to be pretty good at being contrary indicators. 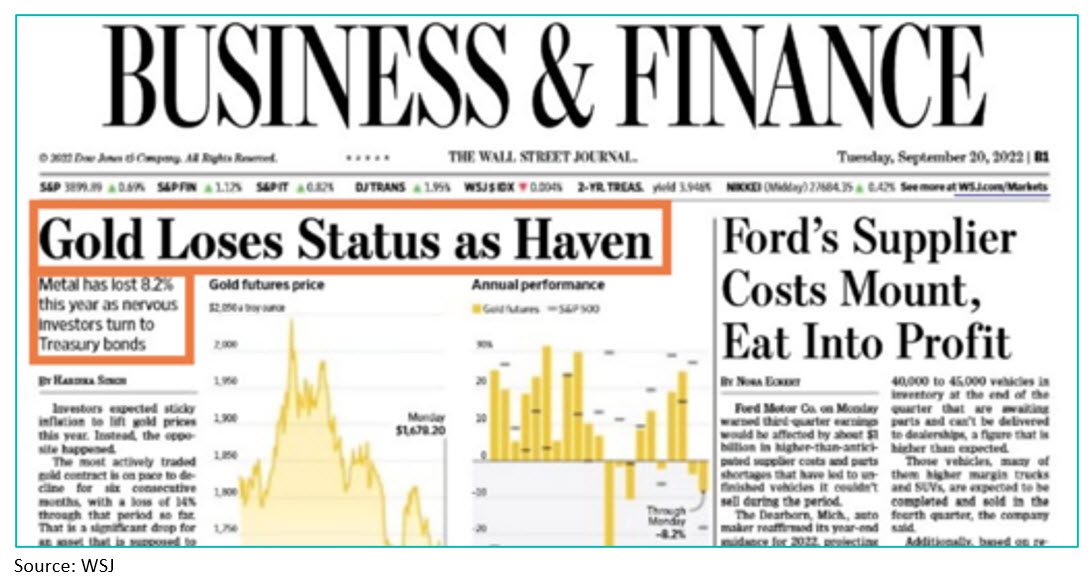 A case in point is the headline of the Financial Times we saved from 1997 detailing the “Death of Gold”. 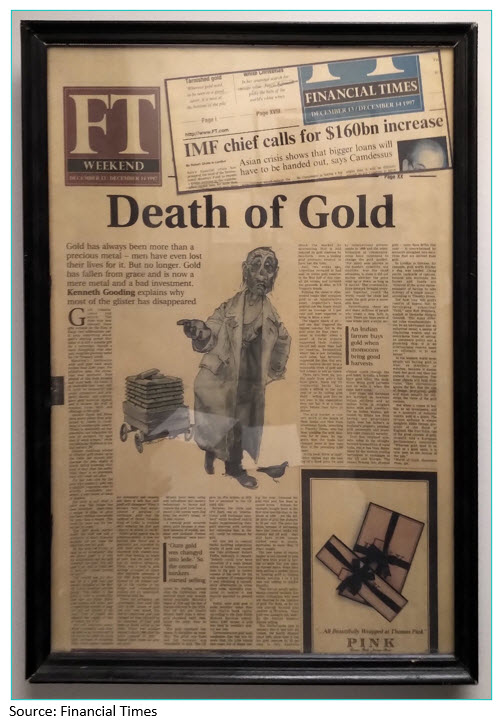 We all know how gold has performed from 1997 onwards and we also know of the remarkable performance of precious metal equities posted during the bull run in gold.

Secondly, we beg to differ on WSJ’s takeaway here about gold losing its haven appeal. On our side of the world, we tend to measure gold’s performance against the US Dollar, which has been one of the best assets to be long through 2022. Through the first three quarters of 2022, the US Dollar Index has risen by a remarkable 17.2% as currencies of other developed nations have faltered. One would think that gold measured in US Dollar terms would be down around 17.2% given that the value of the denominator increased. Interestingly, through 2022 gold has lost 9.2% of its value despite the dollar rising by over 17%. Contrary to the WSJ headline, we believe that gold’s relative strength despite the US Dollar headwinds demonstrates its safe-haven appeal. The turbulence that has wrecked the financial markets through 2022 has impacted various major currencies. The value of the Euro is on par with the US Dollar today. Similarly, the British pound is rapidly approaching parity with the US Dollar. The Yen has lost almost 30% of its value when measured versus the US Dollar. In all the above-mentioned currencies, save for the US Dollar, gold has served as a wonderful haven. The appeal of gold has not been lost to the Central Banks around the world. During the second quarter of 2022, global central banks added nearly 180 tonnes of gold to their coffers on a net basis. 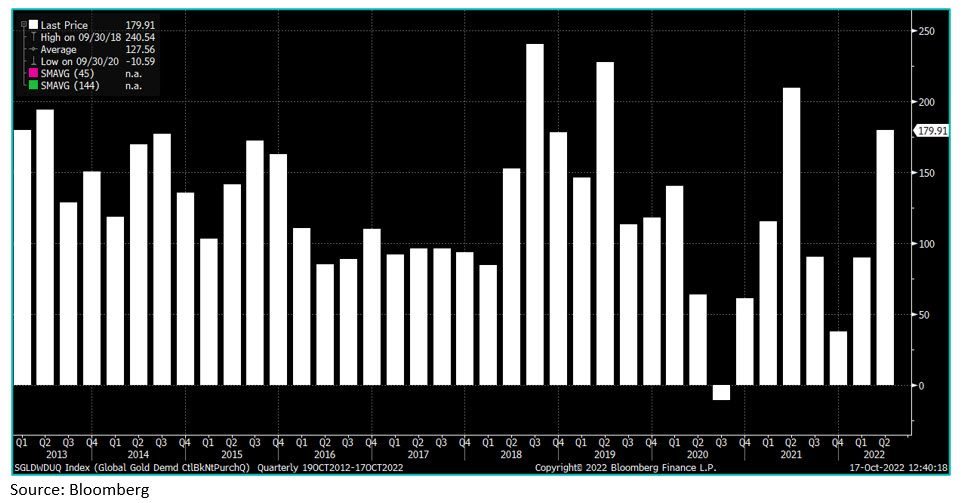 We also saw exceptional demand for gold from China and India, two of the world's largest gold consumers. In China, demand for physical gold was so strong that people have been paying premiums approaching $50/oz for the metal, a sharp departure from 2020 when demand had dried up as a result of COVID. 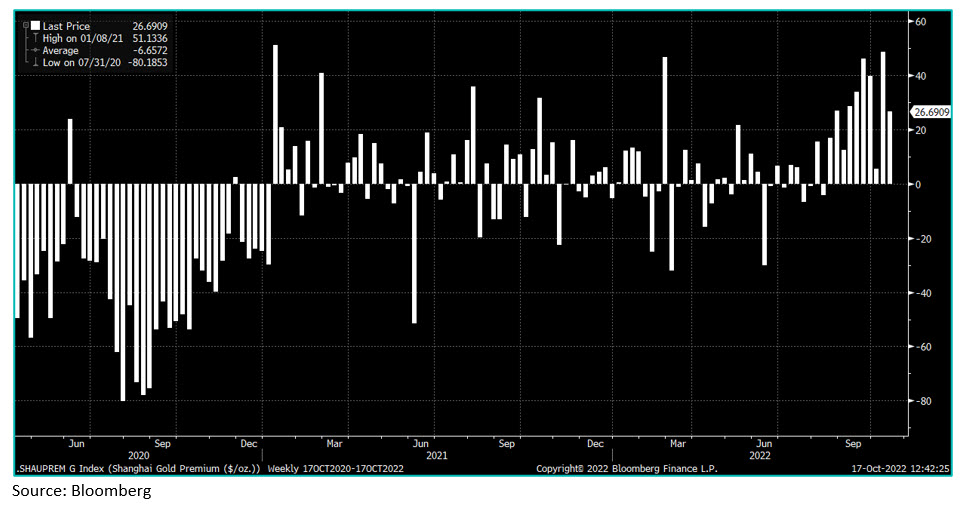 We are seeing a similar story play out in India, the largest importer of gold in the world. Robust demand has led to large premiums being paid for bullion – approaching nearly $70/oz in some instances. 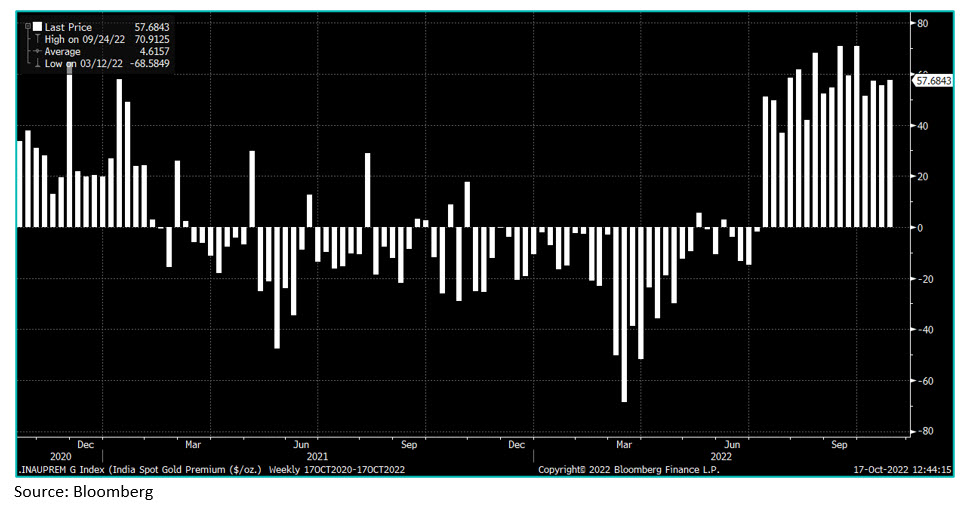 Unfortunately, these developments have been lost to investors in our part of the world as they have been busy liquidating their portfolios, including precious metal bullion. Since April 2022, gold ETF holdings have declined five consecutive months and look set to decline for a sixth straight month. We can only imagine how much higher the price of gold and by extension, silver, would have been if not for the unrelenting liquidations out of bullion ETFs. 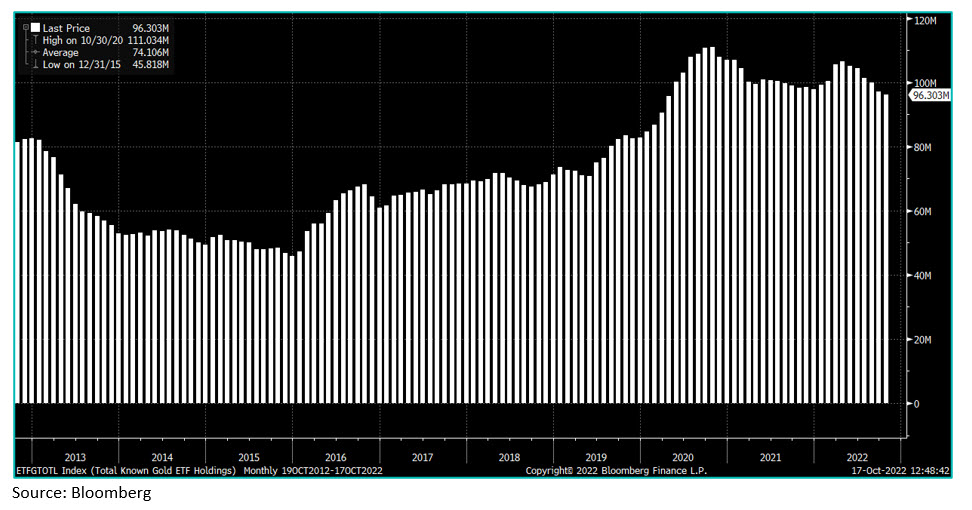 The US dollar’s levitation act cannot be sustained

The wrecking ball of the US dollar has been creating havoc through virtually every asset class and gold has been a casualty. However, a little perspective is warranted here because the US dollar, like all other major currencies, is a fiat currency. The USD has experienced a parabolic move of late rising to levels last seen in April 2002. The price of gold was around $300/oz while the US Dollar was valued at the same level it is today while silver traded near $4.50/oz. 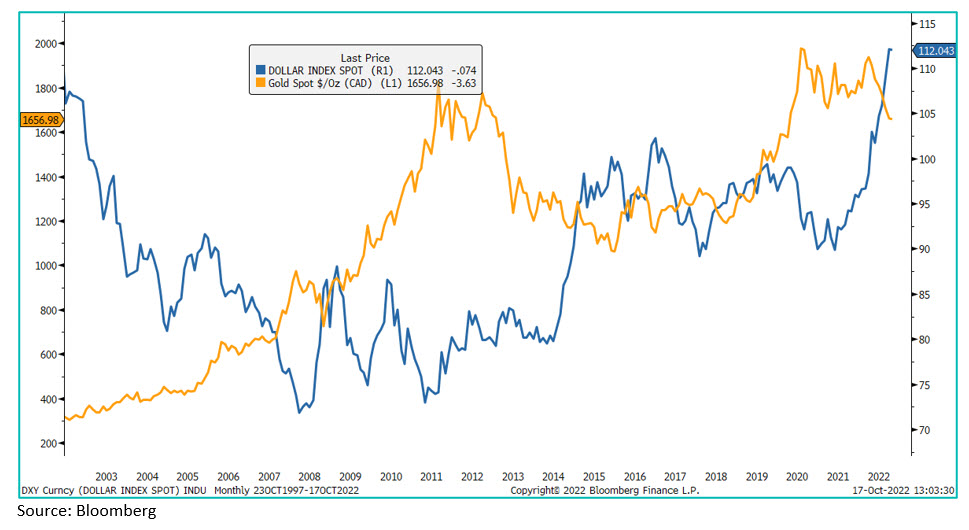 We had commented in our prior commentary that the strength of the USD cannot be sustained and we continue to hold this view. The strength of the USD has been a result of an exceptionally hawkish Fed which appears hellbent on controlling inflation. The Fed’s position stands in stark contrast to the less hawkish rhetoric in the EU and the downright dovishness we continue to see in Japan notwithstanding the collapse of their currency. Despite clear evidence of a softening economy, the Fed appears poised to continue hiking rates. The difference between the Fed and other central banks like the ECB and the BoJ is that the Fed does not appear concerned about the impact of rising rates on the debt servicing costs for both the public and the private sector. The impact of rising rates on the private sector is already making news as rising mortgage costs dampen housing demand and higher interest expenses eat into corporate profit margins. It is the impact of higher rates on the public sector that we have not heard much about – yet.

We all know that the US Federal Government has binged on debt over the past decade. 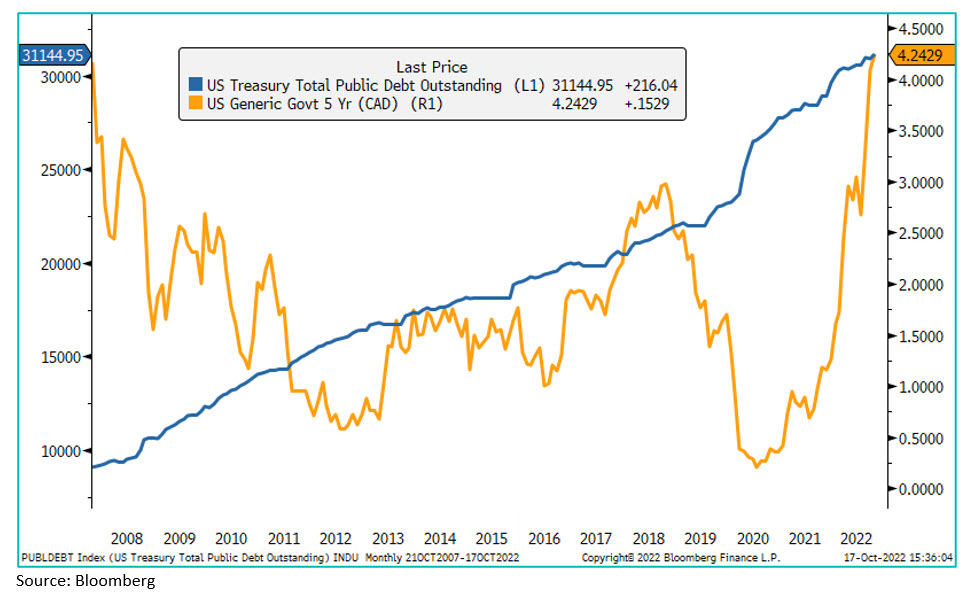 Most of the US debt is financed using short-term paper. According to the Brookings Institute, the weighted average duration of the US Federal debt is ~5 years. We graphed the US debt and the 5-year treasury. The last time we saw the five-year treasury yield at current levels of 4.2% was in 2007. Back then, acronyms like GFC, QE, ZIRP etc had not entered our vocabulary. The US Federal debt stood at a manageable $9T. Fast forward to today and that debt number has ballooned to north of $31T but more importantly, the era of hyper low bond yields is firmly behind us. Debt has increased by nearly 350% and the yields that were previously suppressed by QE have exploded back above 4%.

According to the St. Louis Fed, the Federal government spent nearly $650B (annualized) in interest payments in Q2 2022, up from $600B in Q1 2022.  Since the end of Q2 2022, yields across various maturities, particularly on the shorter end have increased further. The gist of this analysis is that the US Federal government, which is already running a $1T+ annual deficit is on pace to pay nearly 15% of its revenue towards interest servicing costs alone – let alone paying down its debt. Either the Fed tamps down their pace of hikes soon and begins some form of QE, or the US government finances rapidly approach a breaking point. In both scenarios, the US Dollar loses significant strength. In both scenarios, haven assets such as gold and silver stand to benefit. 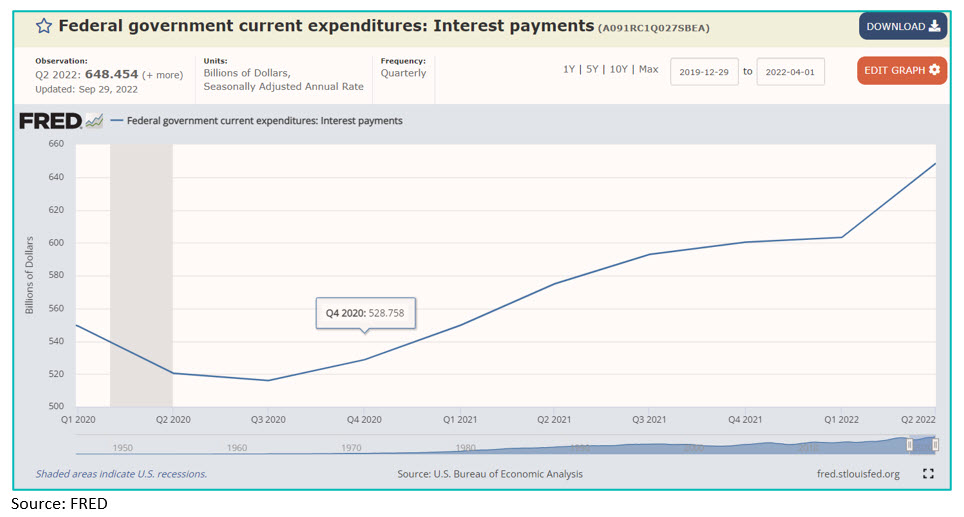 Despite gold and silver suffering drawdowns in 2022, precious metal miners have managed to generate decent profits. We continue to see companies announce buybacks and/or increase dividend payouts. Of note is the dividend yield on the GDM Index which is rapidly approaching a 3% annual yield and continues to positively diverge from the S&P 500’s yield.

The reason behind the rapid increase in dividend yield is rather simple. Most producers that we track continue to earn a reasonable return after taxes allowing them to engage in buybacks or return cash through dividends. Most producers sport a healthy balance sheet that allow them to sustain or grow their production and their dividends. Finally, most producers have seen their shares get clobbered since May 2022 leading to yields rising to ~3% today. The GDM index would need to appreciate 60% for its dividend yield to match that of the S&P 500.

It has been a rather frustrating environment for precious metal investors like us. Gold has declined for six straight months and silver has experienced a deeper decline than gold. GDXJ index has declined in five out of the past six months ending September 2022. While it may not seem so, most measures we utilize suggest that investor sentiment is at a trough, precisely at a time when the backdrop for precious metals is improving. We maintain that perseverance and tenacity will bear remarkable fruit in the years ahead.

Ninepoint Partners LP is the investment manager to the Ninepoint Funds (collectively, the “Funds”). Commissions, trailing commissions, management fees, performance fees (if any), other charges and expenses all may be associated with mutual fund investments. Please read the prospectus carefully before investing. The indicated rate of return for series F units of the Fund for the period ended September 30, 2022 is based on the historical annual compounded total return including changes in unit value and reinvestment of all distributions and does not take into account sales, redemption, distribution or optional charges or income taxes payable by any unitholder that would have reduced returns. Mutual funds are not guaranteed, their values change frequently and past performance may not be repeated. The information contained herein does not constitute an offer or solicitation by anyone in the United States or in any other jurisdiction in which such an offer or solicitation is not authorized or to any person to whom it is unlawful to make such an offer or solicitation. Prospective investors who are not resident in Canada should contact their financial advisor to determine whether securities of the Fund may be lawfully sold in their jurisdiction.